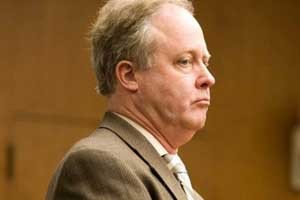 A Los Angeles Superior Court jury on Thursday convicted a 62-year-old Costa Mesa man of first-degree murder in the 1979 cold-case killing of a nurse in Torrance.Douglas Bradford shook his head but showed little emotion as the jury read the guilty verdict. He faces a sentence of 26 years to life in prison when he returns to court Oct. 10.

Lynn Knight, a 28-year-old nurse from Canada, was found brutally slain in her Torrance apartment on Aug. 30, 1979. The killer used a homemade garrote to strangle her and slashed her body with a sharp object.

Bradford had dated Knight shortly before her death and police long suspected he was the killer. But with little evidence, the case sat cold for decades until a Torrance police Cold Case Unit uncovered new evidence and arrested Bradford in 2009.

In the trial, the prosecution painted Bradford as a jilted ex-boyfriend who was enraged when Knight broke off their relationship and dated other men.

When detectives relaunched the case in 1999, they served a search warrant at Bradford’s mother’s house in Costa Mesa, where he lived at the time of the murder. There, they discovered that his mother, an artist, hung her paintings with wire similar to the one used in the garrote.

On Thursday, Lewin said the wire was key evidence in the case.

“It’s a huge relief for our family. Now Lynn can be at peace,” she said. “As he goes to jail, we’re let out of jail.”

Bradford was represented by Robert Shapiro, who was part of the defense team for O.J. Simpson. As part of his defense, Shapiro said there was no solid evidence linking Bradford to the crime scene.